Jupiter Bokondji was born in Kinshasa 48 years ago, into a family of griots from the Mongo region. His grandmother, a renowned healer, introduced him to traditional rhythm and music including the famous Zebola from Ekonda (Mongo région of the equator), rythms that are said to cure the sick. From a young age, Jupiter played percussion instruments and accompanied his grandmother to funerals and weddings.

However, it was in Germany East-Berlin, where he spent his adolescence, and where his father was appointed executive assistant for the Congos embassy in 1974, that he discovered Europe and it’s vibrant music scene – the Stones, Deep Purple, James Brown etc. Here, he set up his own rock band called ‘’Der Neger’’ with fellow young Berliners; their sound was a strange cocktail of Mongo percussions and guitar Zeppelin-esque guitar. The band was successful in all the shady clubs in town. But, his father’s mandate ended.

When he was 20, Jupiter went back in the eighties bubbling Kinshasa head full of dreams, glory and sounds unimaginable to most of his friends. He left the family home, earning a living singing at funerals and playing percussion in several local orchestras.

With his earnings he traveled the Congo, searching for new sounds. These travels reinforced his feeling that all the music he heard in Europe originated from the 450 ethnic groups that made up his country, and that the tribalism that tore his country apart politically, could in fact become a unifying force.

He continued to develop his own unique style, surrounding himself with trendy musicians connected to from Europe. His idea was to reactivate the forgotten rhythms and melodies of Congo, by injecting the urban groove of Kinhasa.

He called this explosive mix ‘’ Bofenia Rock’ and in 1983, succeeded in forming his first orchestra, Bongofolk, who became his musical experiment.

In 1990, he created Okwess International, a group which contained within it avant-garde artists such as Jean Goubald. This group traveled Africa, and was selected to represent Zaire in 1999 at MASA (Market of African Performing Arts). Just at the point where their luck seemed to be finally turning, the country fell into chaos due to civil war.

In early 2004, Jupiter met Renaud Barret and Florent de la Tullaye. The connection was immediate, so much so that the two French returned to record the songs of Okwess International, and other groups surrounding Jupiter, such as Staff Benda Billili. Of this time, Jupiter says ‘ I knew something like this would happen. I was convinced of it.’’

‘The Dance of Jupiter,’ a film documenting his musical exploration was released in 2007. On screen, we see his slender silhouette exploring the various districts of Kinhasa, discovering talent artists undiscovered and unknown by the rest of the world. Little Jupiters, he calls them.

“Today, we find many young groups conitnuing in my footsteps, dipping into our archives for inspiration; my mission is complete. If I disappeared today, I will have achieved my goal’’.

Of course, Jupiter wasn’t about to disappear; he is poised for a fantastic career. In October 2011, he played Kinhasa to an audience of five thousand; five thousand people hypnotized by the powerful rhythm and energy of Okwess International. In July of the same year, he was part of the the album created by Damon Albarn, of Blur and Gorillaz fame, ‘Kinhasa One Two,’ released in November 2011 through WARP.

His album ‘Hotel Universe’ released in May 2013, and will undoubtedly give him the recognition that he deserves. 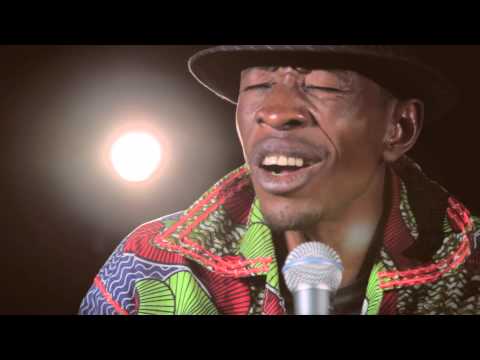