David Byrne said: “I am beyond excited at how much of this has fallen into place. It’s quite eclectic and I hope there are some new discoveries for everyone – including me – in this edition of the festival’

In the summer of 2013, Francois & The Atlas Mountains took a 10 day trip to Africa to tour and meet up with local musicians, with the intention of collaborating. In Ouagadougou, Burkina Faso, Francois jammed with Papa Djiga Boubacar (on ngoni), Luc Kyenbreogo (bass ngoni) and Sanou Darra (balaphon) at the French Cultural Center, building on some simple compositions Francois had already prepared that later blossomed into ‘Ayan Filé’:

“’Ayan Filé came from a spontaneous jam. I started singing words about feeling spaced out as a European traveller landing in Africa. To which Sanou joined in by singing a line from a traditional Burkinabé tune that said ‘Look at us, we’re arriving, pay attention to us. We had a soundcard and a few microphones with us. We plugged them in to the computer and recorded all the instruments live. Because these musicians are so skilled and inventive we only did 2 or 3 takes for each songs.”

Francois’ existing obsession with African music led to this excursion and what emerged became L’homme Tranquille, a four-track EP recorded across Ethopia, Burkina Faso, Senegal and Benin. Earlier this year, the EP was launched via an interactive website built with Le Monde to celebrate the launch of its new African channel. The site is now accessible in both English and French and acting as a creative and interactive tour diary, it features a range of candid photographs, information and band illustrations documenting their time in Africa. As vibrant and engaging as the EP itself, it’s a great insight into the band’s time away. Explore L’homme Tranquille with Le Monde HERE 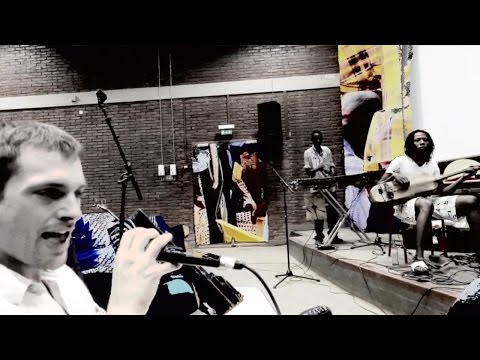